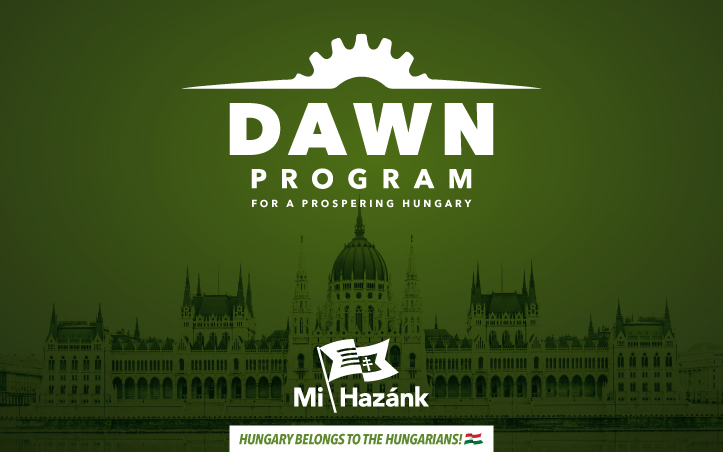 The Virradat Program of Mi Hazánk (“Dawn Program”) is not only an election program; instead, it is a work plan spanning several cycles, which intends to remedy the strategic mistakes of the derailed regime change. A real turn, a radical and fundamental change is necessary to achieve that we can again be an ascending nation. We are committed to constructing a work- and performance-based welfare society, where knowledge, expertise, practical experience and diligence are honoured along with acknowledged values. We believe in an organic society, where everybody can find their own place. We believe that the strength of local communities lies in its members and in the suitable and adamant leaders of clear intention. We believe in the Hungarian people. We believe that all Hungarians are responsible for all Hungarians.

We want to create a homeland where the entire country grows, is constructed and blossoms. A place where people look to the future with confidence and peace. Instead of self-centred political mudslinging, causing general indifference and depressive mood, we want to provide a positive vision of the future to the Hungarian people. We want a homeland where the state protects all decent people, from external housebreakers on the borders, and from all criminals within the country. A homeland where elderly people are taken care of appropriately, where the youth does not dream about work and life abroad, since planning long-term and starting a family are possible here as well, where it cannot be a question that this is the best place in the whole world. It is our homeland, where the elderly and the youth can also come home after several years from distant countries, since some kind of a magic, a real Hungarian rebirth takes place. Such a real Central Eastern nation that is equally proud of the thousand years of Western and Christian culture, and the glorious wildness of the ancient Hungarians, the Eastern inheritance as well. Instead of an atomised society, we would like co-operation building on confidence, respect and love, undertaking mutual assistance and payment of public dues, after all a just, solidary, growing and organic society.